Herbie Hancock – an absolute music legend of the last six decades – returns to Umbria Jazz after a few years (his last performance here was a piano duo with Chick Corea). The word “icon” is often used in show business. However, most of the time, it is misused. No doubt for Herbie Hancock. The […] 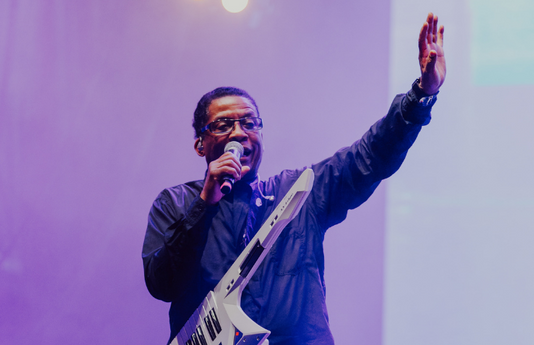 Herbie Hancock – an absolute music legend of the last six decades – returns to Umbria Jazz after a few years (his last performance here was a piano duo with Chick Corea).

The word “icon” is often used in show business. However, most of the time, it is misused. No doubt for Herbie Hancock. The Chicago-based artist, 81 years old today, crossed genres and styles – by playing a leading role – as a performer, composer, arranger, producer, talent scout, inventor of new trends, and influencer for more than a generation of musicians. When he was 11, Herbie debuted playing a Mozart Concerto with the Chicago Symphony Orchestra, one of the most important ensembles in the world. Soon, he discovered jazz music, and from the 60s, Hancock stood out with a series of excellent records for Blue Note studded with original themes, which would soon become standards.

Meanwhile, he was part of the epic quintet of Miles Davis, who said: “Herbie was the step after Bud Powell and Thelonious Monk, and I haven’t heard anybody yet who has come after him”. The 70s were the years of electric jazz and Headhunters, marked by overwhelming commercial success. Hancock found a formula meant to be a model for dozens of bands. This success never damaged quality since Hancock has always been able to combine good music and popular appeal. Even then, he continued to work on acoustic jazz, such as in the series of records and tours with VSOP. On that occasion, whether it was acoustic or electric music, modal jazz or funk, in stadiums or concert halls, Hancock’s brilliant and personal style remained unique and always true to himself. In recent times, Hancock has produced a series of thematic projects dedicated to Gershwin, Joni Mitchell’s songs, and new standards borrowed from contemporary pop music, besides a tribute to Miles Davis and John Coltrane and a duet studio album with Wayne Shorter (1+1). It is necessary to mention also the venturous “Dis Is Da Drum” and the suggestive “The Imagine Project”, which was recorded in many locations throughout the world.

Of course, such a career has been awarded and recognized on several occasions: an Academy Award, fourteen Grammys, countless MTV Awards. Hancock was named a UNESCO Goodwill Ambassador and received the Kennedy Center Honor. He was given the Commandeur des Arts et des Lettres by France. He is a member of the American Academy of Arts and Sciences, and much more. An icon.

A set of music stars forms Hancock’s band: Terence Blanchard (trumpet) is one of the most contemporary jazz artists; Lionel Loueke (guitar) is a talent discovered by Hancock (Loueke dedicated him an album and a tour); James Genus (double bass) has played with dozens of great jazzmen, including Hancock, as well as being a bandleader; Justin Tyson (drums) has a background in gospel music – he started playing the drums at the age of three, and he recently collaborated with Robert Glasper and Esperanza Spalding.